I’ve written several short stories over the last few years and I’ve gotten pretty comfortable with the format. It’s nice to be able to jump right into a story and get to the point. Hellmaw: Stormbringer was an order of magnitude larger than anything I had attempted before. I thought I knew what I was getting myself into, but I quickly realized otherwise. 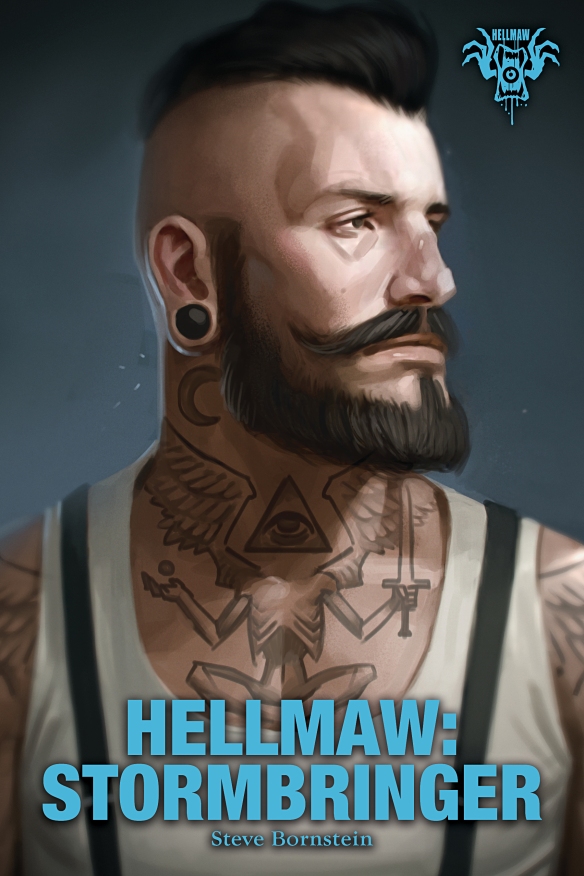 Time Doesn’t Care About The Schedule

Once I had an idea of a short story’s plot, I could usually get it written in a couple weeks. I don’t really keep track of word count while I’m writing (more on that later), but I would have a general idea of the three or four scenes I wanted to do and get them written in a few days. I’d give myself a few days away from it to let the story settle in my head, then I’d go back and give it an edit pass or two and be done with it.

When I started on Stormbringer in November 2015, I gave myself a goal of 500 words a day. I figured it was a low-enough goal and I had enough time that I’d be able to get the first draft done in plenty of time for beta-reads and edits.

After a few months, though, it was obvious I had been a bit too ambitious. I hadn’t accounted for the days when I’d be too tired at work to get into prose headspace, or the days when I was travelling to and from work and my sleep schedule was all out of whack, or the days when my personal life had to take priority over sitting down for a couple hours to get some writing done.

In the end, I got the manuscript done in time for some quick beta-reads, but it ended up being a sprint to the finish where I spent about a week sequestered in my office at home writing thousands of words a day. Part of the reason for that was I was into the climax of the book and didn’t want to lose the energy and action of the scenes due to pauses in writing, but it was also because I was running out of time. It all worked out in the end, but next time I’m going to give myself a lot more time so any writing marathons are wholly voluntary.

Inspiration Comes When (And Where) You Least Expect It

When I sit down to write a scene, I have a general idea of what I want to accomplish and which characters are going to do what, but I let the details work themselves out as I write. I’m not one to outline every single little thing in the plot. I just work with a general framework of “I’m here, and I want to get over there” and figure it out as I go. Instead of a tightly-written script, it’s more like a bunch of little improv sessions. I’ve heard this style of writing described as “laying track in front of the train as it’s barreling ahead”.

The funny thing about improv is, things pop up when you least expect it.

Halfway into an early scene in the book, two of my characters decided to get into an argument. I hadn’t even thought about having an angry, sullen exchange but bam, there it suddenly was. It gave me a couple moments of pause. What was going on here, and did I want to pursue it? I figured the worst would be some lost time so I went with it and let the two have their conversation, and a whole pile of character development unfolded right in front of me. I hadn’t planned any of it but I ended up using a lot of what came out of that further along in the story, and the whole tale ended up stronger because of it.

There’s another scene in the book where a daemon is impersonating someone, and I got to a point in the scene where they’re about to talk to someone else when I suddenly realized that the daemon had only seen what the impersonatee looked like, not what they sounded like. This was going to be a big problem, because (for spoilerish reasons) I couldn’t just go back and write about him hearing the sound of the person’s voice. What to do? Have the daemon realize it at the same time! I got to show him deal with a sudden setback, and how he got through it gave me more writing fodder later on.

The Struggle Is Real

I wasn’t ready for the full-on grind of writing every single day for months on end. When I’m at work, I’m working 12 hours a day for 21 days straight. After taking out more time for things like sleeping and making sure I’m fed and clean, that only leaves me with two or three free hours a day. Do I write, or do I take some time to relax, read a book, maybe play a game before my next 12-hour shift? It was a constant struggle to not hit the snooze button on my phone alarm or just listen to a podcast and read for a while. Every day was writing first and chilling-out second. Even so, there were some days when self-care had to take precedence and word count had to wait.

Staying on track at home was easier, but it still wasn’t easy. I had a lot more free time but a lot more things to fill it up, too. Chores around the house, spending time with friends and family, and the relaxing I typically did when I was home now all had to compete for my time with writing. There were days when the words came easily and I could hit my word count in just an hour or two, and there were days when I had to stop myself from beating my head against my laptop. I quit playing a lot of my favorite games simply because it was the simplest time-sink to give up. Even now, a few months down the road, I still haven’t gotten back into Warframe or Elite Dangerous yet because I managed to break the habit of dedication games like them require.

It’s Easy To Repeatedly Repeat Yourself

I spent about seven months writing Stormbringer in bite-sized chunks. Even though I had the plot and its major points laid out in my head and across my various planning documents, every time I sat down to write I didn’t have the entire story to that point fresh in my head. After the first draft was done and out to the beta readers, I discovered there were a lot of places where I’d ended up repeating what was said or explained earlier in the book.

I discovered that I’d ended up writing out the process of getting back into the headspace of the character, so many times when there was something big going on or a decision to be made I’d written out the justification for it. At that moment in time, it made perfect sense because I was working on that one scene. Once all the pieces came together, though, it stuck out like a sore thumb. I lost a few hundred words in editing just from that. Unlike the rest of this list, this isn’t something I’m going to try to change. I think it’s better to have it in there and edit it out later than just blast on ahead and assume I’ve justified an action at some previous point in the story. I’d rather have the reason in five different places and edit it down to just one than have it nowhere and risk leaving the reader confused.

The Story Is As Long As It Wants To Be

My first short story, Full Circle, came in a smidge over 3400 words. It was the longest thing I’d ever written; up to that point, all I’d done was mostly just collaborative real-time roleplaying online. It was a bit of a step up going from glorified chatting to actual storytelling, but the short story format lent itself well to the style of writing I’d settled into. I was used to quickly getting to the point. When you only have a few thousand words to tell a whole tale, you don’t have a lot of wiggle room. With all the short stories I’ve written, I simply started writing what I had in my head and kept an eye on word count as I progressed. In most cases I ended up in the word count range I needed, only going a little bit over count one time.

With Stormbringer, I had no idea how long it was going to be. This wasn’t some little story I could tell in three or four scenes. I didn’t even know how many chapters I was going to have. I wanted to hit 85,000 words because that was generally considered the low-end for a modern sci-fi/fantasy novel. When I hit the halfway point in the plot, I was around 40,000 words into the story. No problem, I thought. I got this.

But I didn’t realize just how got I had it. As I left 85K in the rearview mirror, I still had a lot of story to tell! The first draft ended up being 101,073 words. After beta reads and edits, it came in just shy of 100K. That’s not too long but longer than I thought it would be, which ended up pushing me against my deadline since I’d budgeted my time for 15K words less.

Writing a novel takes more planning and awareness than a short story. Next time I do this (and there will be a next time), I’m going to give myself a lot more time. I think I’ve got a good process; writing “by the seat of my pants” fits me really well, I think I’d feel too constrained by sticking to an extensive outline. I gain far too much inspiration during the writing process itself. I’ll definitely give myself more time, though. I need to budget for keeping myself sane!