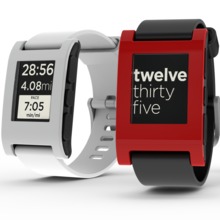 The Pebble smartwatch was born on Kickstarter, raising over $10.2 million to make it the most successful crowdfunding campaign ever. It promised a watch you could customize and use with all manner of internet-connected apps via a Bluetooth connection to your phone. When the campaign ended on May 18, 2012, the company got right to work on finalizing specs and setting up manufacturing lines for the 85,000 watches that were funded during the campaign and the thousands more that would be sold afterwards. As with most new ventures, their timeline stretched out due to difficulties but watches have finally started shipping in the last few weeks and mine arrived a week before I headed back to the rig, giving me enough time to have a thorough test run before having to set it aside for a few weeks. So how is it?

There’s no way around it: the Pebble is pretty big. At 3cm by 5cm, it’s likely bigger than any of your other watches. It’s not huge (it takes a standardized 22mm watch band) but it’ll pretty much cover one side of your wrist. That said, it’s also very light, surprisingly so given its size, and the ends curve down a little to follow the bend of the wrist so it fits well. It comes with a fairly plain silicone rubber watch band that’s serviceable, though the holes in it left it either too tight or too loose on my wrist so I quickly replaced it. If you look through the 22mm watchbands available on Amazon you can find several Pebble-oriented reviews among the top hitters, so I suspect others are finding it a little wanting as far as fit or looks go. There’s also at least one thread on the Pebble forums discussing aftermarket watchbands complete with pictures.

The display is pretty nice. It’s only 144×168, but it’s a highly reflective black-and-white LCD that’s perfectly visible even in direct sunlight. Since the display is small and typically viewed from about a foot away, the low pixel count isn’t very noticeable; most fonts and images render with little “jagginess” unless you look very closely. The backlight is strong and turns on at button pushes or when it receives a notification and the ambient light sensor decides it’s too dark to see, and turns off again after a few seconds. However, the physical build of the display does seem to have an issue. I’ve noticed a sort of halo around the edges of the screen, and I’ve seen some reports on the forums from other people with the same sort of issue. Judging from the look and shape of it, I think it’s a diffraction pattern that’s being generated due to the very close tolerances inside the watch case, between the transparent cover and the surface of the display. It’s more noticeable in bright light against a white background. Against a black background it’s practically invisible. It’s nothing that hinders using the display, but it’s still there. I suppose little detail-oriented issues are bound to crop up in what’s basically a version 1.0 device, but it’s still a little disappointing.

The buttons are big and easy to find with your fingers, in places where your hand will naturally want to fall. They’ve got a good bit of travel and flex, enough so that it makes me wonder how they managed to still build the case to 5ATM worth of water resistance. The spring on them is fairly strong too, so you have to make a definite effort to depress them. It’s good tactile feedback. 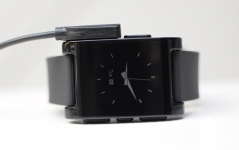 The Pebble is powered by a 140mAh rechargeable non-replaceable lithium-ion polymer battery. Battery life is touted as being “7+ days” and the Pebble FAQ explains this further as “seven (7) days with occasional use, or five (5) days with frequent notifications and backlight activation,” but anecdotal evidence suggests that this can be highly variable. In my week of actual use I recharged it after five days without having gotten a low battery warning and letting it sit idle with the Bluetooth turned off got me over a week before the battery ran down, but there are lots of reports of people getting only a couple of days or so before they needed to plug in. Pebble believes this has to do with different Bluetooth configurations on different phones. I suspect it may also have something to do with the watch’s hardware itself than any manufacturing defect. One of the biggest power users is the backlight. The backlight originally had two modes: disabled or on, where “on” would turn on the backlight when a button was pressed or the accelerometer had decided you’d flicked your wrist (more on this in a moment). It’s easy to see how this might cause the backlight to come on when, say, jogging or doing some other vigorous movements with your arm. Go running for a half-hour and your backlight would be on for a full 30 minutes. Now that the latest firmware includes the ability to turn off the “shake to light” feature, I’m interested to see if abnormal battery drain complaints begin to taper off (the latest firmware, 1.10, also included a fix for a bug that was halving the battery life for some iPhone users). The battery recharges in only a couple of hours via a custom USB cable with a magnetic connector that fits onto the side of the watch under the “back” button. It’s strong enough to keep the cable on the watch’s contacts, but it’s not much stronger than that. You can probably forget about wearing it while it’s recharging, but it won’t fall off just sitting on your desk. 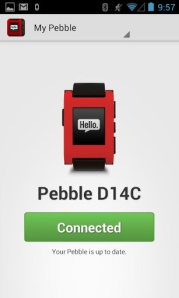 The Pebble connects to your phone via Bluetooth and interacts through an app which is available in the iPhone app store and the Google Play store for Android phones (which is what this review will discuss, since that’s what I have). Once you’ve paired your Pebble with your phone, the Pebble app will terminate itself when you turn your phone’s Bluetooth off and automatically reconnect when you turn Bluetooth back on, without any need to restart the app. That’s a pretty handy feature that I appreciate given how often I’m on a plane (though you still need to put the Pebble itself in Airplane Mode to turn off the watch’s BT). The watch will continue to keep time just fine with Bluetooth off and vibrate for any alarms you have set on the watch itself, but of course you won’t get any data to or from your phone. The watch will also automatically sync time with your phone when connected, which comes in handy if you travel between time zones. Out of the box, you can have it display new email and Gmail messages, SMS messages, caller ID for incoming calls, calendar reminders, Google Talk and Google Voice messages, Facebook messages and updates, and WhatsApp messages. It’ll also allow you to control your music app of choice.  Additionally, it’s the mechanism for updating the Pebble’s firmware and installing new watchfaces. The Pebble can store up to eight watchfaces, so changing the default look of the watch is as easy as pushing a button.

The app is still pretty basic; the company is hard at work adding in features (the latest update tweaked the backlight as mentioned above, gave us a “Disable Vibration” setting, and added a setting to enable installing third-party apps created with the Watchface SDK), but at the moment most of the watch’s functionality comes via third-party phone apps like Pebble Notifier, which will forward virtually any app or system notification from your phone to your Pebble as well as make it work with the amazing Tasker automation app.

Which leads to one of the biggest gripes Pebble owners have: some of the watch’s features have yet to be fully realized. You still can’t use it as a jogging or cycling readout because there are no apps yet to let it access GPS data from the phone. There’s no native Twitter or weather functionality yet. At the moment, the sole use for the Pebble’s accelerometer is to turn on the backlight with a flick of your wrist and no way to use the watch’s magnetometer or ambient light sensor. The company isn’t slacking off, though. In just the three weeks I’ve had mine they’ve released two firmware updates. Software and SDK development remains slow but steady as the company rolls out new features.

Still, to get the most out of it I have to use Pebble Notifier, and maybe that’s a good thing. Rather than getting restricted by the official featureset or a bloated app, I can pick and choose what I want my watch to do. I couldn’t care less about a golf course app, but being able to have Tasker notify me of nearby wifi hotspots or have Accuweather send storm warnings directly to my wrist is pretty handy.

But How Does It Taste?

Despite the title of this post I can’t actually make a phone call through it (no microphone or speakers), but it’s pretty much become a secondary display for my phone. Where before I’d have to pull my phone out of my pocket to read a text or see what notification just dinged at me, now all it takes is a glance at my wrist. Phone call? Glance at the caller ID where I can dismiss it if I don’t want to take the call.

The watch’s future is looking bright too. Firmware updates with increased functionality are coming at a reasonable pace and users are hacking all sorts of neat things together with just the beta tools that are available now, like this Tetris clone. People are designing new watchfaces with the current proof-of-concept watchface SDK. The official Pebble Watchapp Directory for 3rd party apps and watchfaces just keeps growing. There’s even a budding aftermarket, including decorative custom protective skins by Skinomi and GadgetWraps and a Kickstarter for fancy leather watchbands. Now that Pebble has released the watch’s 3D print files, people can use them to design accessories like this proposed charging dock.

Simply put, the Pebble has completely changed the way I use my phone. In a time when our phones are increasingly becoming our link with the world, the Pebble extends that communication capability while giving us a little more freedom from the device itself.